To his surprise, the dog was not timid at all. In fact, the dog loved getting attention. When offered the treat, the dog wagged its tail. That was a good sign that Rojas had earned the dogs trust. As it turned out, the dog was incredibly sweet, even with Rojas’ daughter.

Rojas knew he had to do something fast, so he called the Center for Animal Welfare for help. When the dog was finally safe, Rojas didn’t stop there. It turns out that this practice is legal. After witnessing the dog’s horrible condition, he urged the local government to get involved.

Rojas approached Democratic state representative Mickey Dollens to create a bill that will protect animals from such abuse. While Rojas was not able to adopt the stray dog, he is happy that the pooch got the care that was needed. It was also important that Rojas worked toward changing the laws that allow this cruel practice.

Last year, a mom shares the beautiful moments between her 2 year old and his furry bff.

Meanwhile, a dog had the time of his life during his chub man suit party.

And a mom catches her toddler and pup in the cutest howling session. 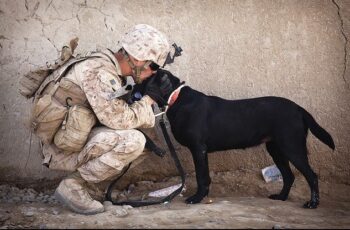 The soldier starts to plays with the dog as he’s …

The occupants of the house noticed the dog bringing the …