The dog was pregnant. They didn’t know whether she needed food or if she was cold or needed help. They simply abandoned her. Who was going to rescue her and her puppies? 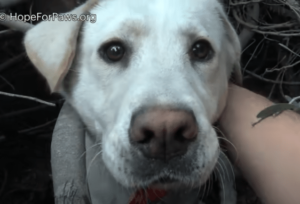 Abandoned dogs are a serious problem in America and other countries around the world. Negligent owners abandon their fur babies without regard to their care and safety. This causes these dogs to experience needless suffering which is why abandonment is a crime in many nations.

One such story of abandonment is of a poor Labrador Retriever named Amazon. She was rendered homeless by her owners and took refuge with two other homeless dogs, a Pitbull and a Rottweiler we will call Rocky and Buddy respectively. They lived in a bushy forest like area which was between a residential street and a busy highway.

Although her previous owners may not have cared, someone did and it was a neighbor that lived near that bushy area.  Thank God he fed them and checked on their wellbeing. However, it wasn’t safe for her or her comrades to continue to live in that area and Amazon was pregnant. So that Good Samaritan contacted Hope for Paws, a rescue organization in order to get the dogs the help they needed.

The rescue wasn’t going to be easy. By the time the rescuers were able to get to the dogs, Amazon had already given birth to her liter, which made the rescue a little more challenging. The area wasn’t safe for curious and vulnerable puppies because it was next to the highway.  They had to find these puppies as soon as possible to keep them from harm.

When they arrived they needed to ascertain the location of the puppies. Where were they? This really concerned the rescuers. 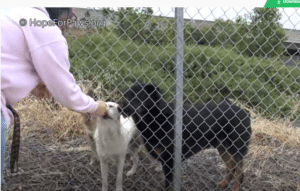 So they took action as soon as they arrived by providing treats to the three dogs. This helped to create a positive experience with the rescuers and build trust. We know how much dogs love food so they certainly obliged. They also used this a diversion for the Rocky and Buddy so they could find Amazon’s puppies.

Everything as going according to plan. The two rescuers were giving away treats but then Amazon ran off with Rocky. One of the rescuers followed Amazon into the dense vegetation, hoping that she ran to go and protect and care for the poppies, thereby giving away their location. But it wasn’t easy to spot Amazon. The question still remained, where were the puppies? 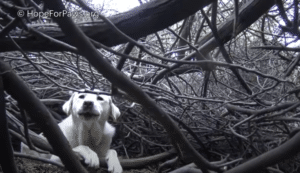 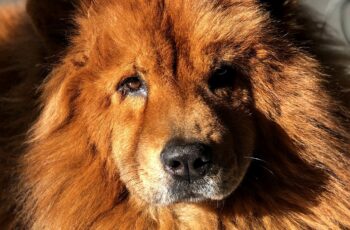 Advertisements A few years ago, there was news about a … 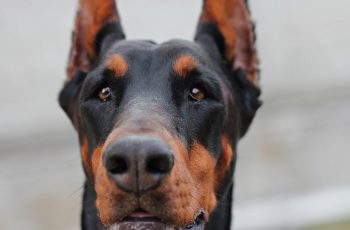 Advertisements Despite giving birth 12 weeks prior to the competition, …